Research on Parent to Parent 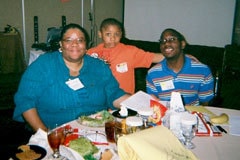 An overwhelming majority of parents tell us that they find one-to-one support to be very helpful from another parent who has been in a similar situation. A participatory action research team of parents and researchers conducted a three-year national study to determine the effectiveness of parent-to-parent support which confirms that finding. Results of the study found that one-to-one support increased parents’ confidence and problem-solving capacity, increased parents’ acceptance of their situation and their sense of being able to cope. Interviewees noted that this type of support could not be provided through any other means.

“…Texas Parent to Parent is different in that it is parent-led and parent-driven. I spend a lot of time listening to social workers, doctors, nurses and people who genuinely care about what they are doing and have really good intentions. But they just don’t know what it feels like to go through the day-to-day struggles. I’ve enjoyed talking to other parents who really know what it is like – even if their situation isn’t exactly the same. They can understand the day-to-day struggle of how am I going to manage my child and relationship, take care of myself, and get everything I need. It is completely different when you’re talking to another parent than when you’re talking to a professional.” Kim Arnold, Parent